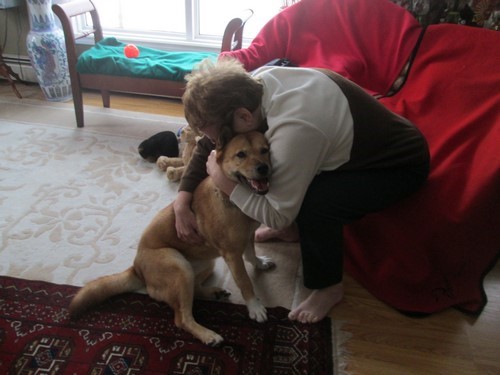 One picture is worth a thousand words 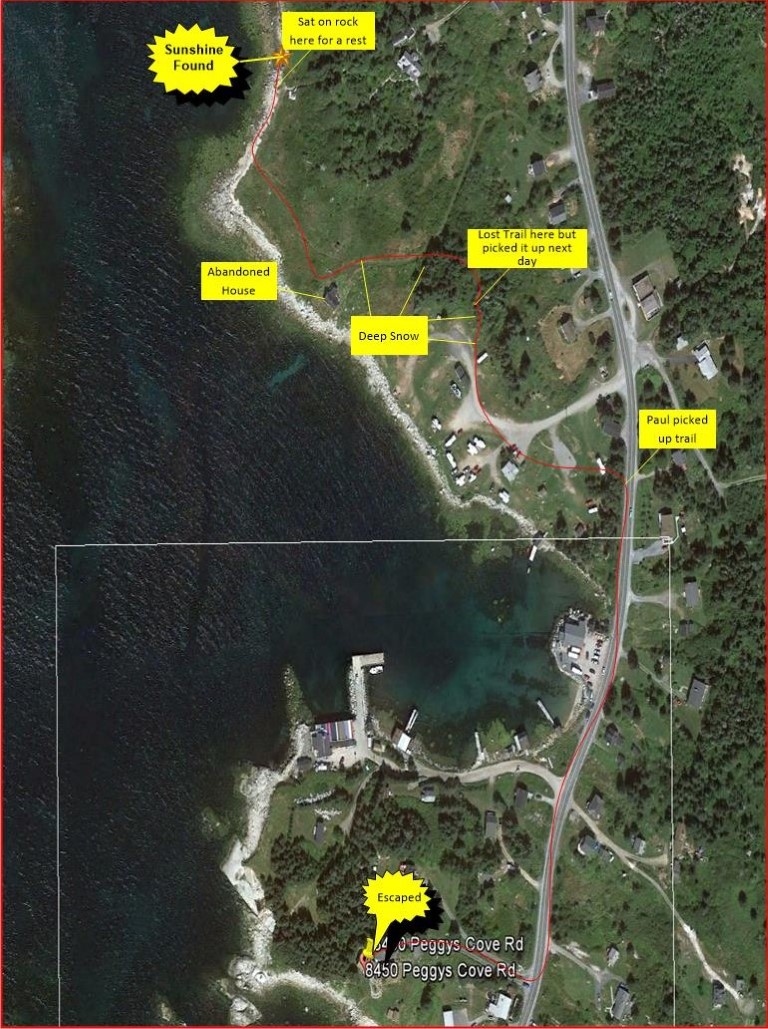 Copyright ©2010-2016 Queenidog Graphics - All Rights Reserved
Sunshine escaped once again, Escape #6 or 7…I’ve lost count. I was walking her down the driveway with safety strap on leash handle wrapped around my wrist. I went to get something from my jacket pocket on that side when the handle popped out of my hand and the safety strap became unravelled. Sunshine was loose. I called her and she came back within one foot of me but when she noticed she was no longer attached, like some slave, she turned and high-tailed it down the driveway. I saw her turn left, going north and immediately told Barbara about the situation then jumped in the truck to chase after her. I did not see her.

Send Comments
First Tracks Paul and I tracked the footprints through deep snow on the Campground property. The tracks seemed to end at the bottom of a hill behind a house our friend Brenda used to live in. Kids playing outside said they were outside all day and never saw Sunshine, yet the trail ended where their footsteps began. We couldn’t figure it out. I actually thought at one point Sunshine had been “dog-napped”.

Hiking through the bush and even the flat areas where 30 or more centimeters of snow had fallen, and drifted, was a harrowing and difficult task. At one point Paul called back to me because he was up to his hip in snow. I told him he “was on his own” because I had to find the dog! Ha ha. On one of my own forays, I attempted to walk down from “Brenda’s” house to where we lost the trail. About half way down the hill I fell forward with arms outstretched and never touched land underneath. As I pushed to get myself up, my hands just disappeared in the heavy snow. (It was hovering around zero degrees, so snow was melting). I tried a few more times thinking how I might have to phone the fire department, or somebody, to rescue ME, but I managed to get out. I went back the next day (same day of this writing) and saw the hole I made…it was in shadow because it was so deep! I shouldn’t have laughed at Paul when he sunk to his hip!

Send Comments
Lost Dog Network We put a lost dog notice on the Lost Dog Network, an organization of volunteers with a website that does an excellent job of posting information about lost animals. Shortly after posting I saw numerous “shares” of the information among viewers. Our problem is that we were in the country, on an acreage, and there were likely few people in our area that knew about the Network. Regardless, getting the information out and using social media (the LDN also posted information on their Facebook page), was a good thing.

We went out after dark, as late as 9 PM to just “listen” for whining or barking. Heard nothing. We both had hope when it was daylight, now hope was fading. Our dog was lost, it was dark and cold and she was out there alone. It was a tough night for both of us. We left the outside and garage lights on, the door slightly ajar and pizza crusts inside and outside the house, in case Sunshine returned. I knew she would not. She escaped at 12:30 PM and it was now 11 PM when we went to bed. Sunshine had been missing for 10-1/2 hours and we had searched for about 8 of those hours.

Send Comments
More Mad Than Sad Honestly I was PISSED at the dog for running away. She has 10 toys, gets walked 6 times a day, we never leave her alone. She gets beef heart, chicken, salmon and haddock for dinner, the 3rd portion in every package. She has no cage, I made her a 100 foot lead for her to be able to really run, she gets petted and massaged many times during the day. And she runs away?

The next morning I got up early, no breakfast, but took a coffee with me to go out searching for the dog. I was hopeful but yet I’m a realist, I knew the outcome might not be good. I prayed out loud, “Please let me surprise Barbara by finding Sunshine”.

I went back to “Brenda’s” house at top of the hill, still saw no tracks. Taking a page out of the true crime TV programs I watch I decided to “review the evidence” and go back to the last known spot where I knew Sunshine had been. Whenever I’m with someone who might venture off on their own, eg my wife, friends or kids, I always tell them, “if YOU get lost remember the last place you saw me, because that is where I will go as well”. So I applied that logic here. (See why TV is good for you?)

Send Comments
If at First you don't Succeed... Slogging my way through deep snow I found some old human footsteps with dog steps inside that looked fresher. Then the prints diverged to only dog-prints which I was convinced were Sunshine’s. The trail soon ended at water’s edge. It was low tide and the dog likely followed the rocky coast line instead of going in the snow. There were no footprints in the sand that I could see so I stayed up on the bank and spotted the occasional dog footprint here and there.

Send Comments
Bark the Herald Angels Sing... Exhausted, I found a big rock on the beach to sit on. I heard a bark. I turned and there was Sunshine about 100 feet away from me, standing, wagging her tail. Tears came to my eyes. The search was over. Sunshine soon recognized me as I took the first few step towards her and she stopped barking.

I gave her a big hug, told her how we had been looking for her and feared the worst. Then I untangled her lead which had the handle wedged under two rocks and the rest of the cord wrapped around 2 more. Sunshine had about 4 feet of movement and must have been laying in the sand between the rocks overnight. Where she was caught was below the high tide mark, that is, where the water will reach or in this case, pass, at high tide. Since it was low tide, high tide would have been 6 hours previous, but fortunately it was not a “high-high” tide (known as a Spring tide, regardless of the season).

Send Comments
We walked back along the same path she had taken to get to her destination. I didn’t want to take any short cuts, or try to go up an apparent path to the road because I didn’t know how bad the snow would be and it was grueling enough following my own footsteps.

When I took her out of the truck at home, and Barbara was calling her, Sunshine did what she always does: ignored us, and started exploring in the trees.

Send Comments
As usual, since she ran this way twice before (Read stories of her escapes on this page), we had ideas on where to look. An advantage this time was the snow cover so that we could actually see tracks. We didn’t find any at all the places I had taken her on walks, nothing in the ditches, or on known paths. Barbara had told our friend Paul that Sunshine had escaped again and he started searching with his van, up and down Peggy’s Cove Road and found tracks in the ditch near the campground. (Refer to map at end of text). I had been out the previous hour, scouring the area up and down the main road and returned home to get my cell phone so it was fortuitous I was there at the time of the call. Barbara was walking around the acreage, basically the peninsula looking for signs of the dog.