Someone's in the back room with Dyno


·
Copyright ©2018 Queenidog - All Rights Reserved
(Sung to the tune "Someone's in the Kitchen with Dinah")
Someone's in the back room with Dyno
Someone's in the back room I know-ow-ow-ow
Someone's in the back room with Dyno
Makin' power with the old five-oh!
Well, I had to use a little poetic license there since my
351W motor is actually a 5.6 (liter), not a 5-point-oh.
The engine from Thunder Road, my 1982 Mustang, was at Guyon Racing for refreshing. Part of the deal I made with Vince The-Engine-Guy was 8 hours of dyno time. The engine had to be run and broken in anyway, so what better way than to get it done where the experts were? In the past I would take possession of an engine, install it, and run it, usually after lots of screwing around. Finding out that you have an oil leak is better at the shop than it is at the end of the track! Yeah, this was much better. Besides, a braggart like me likes to have his facts correct, so when I say my engine is making 500 HP, I want it to be accurate! I've heard people at the track tell me their 3000 lb car is making 600 HP, so how come they only turn a low 13?

Although Guyon Racing has been sold, Pierre Guyon is staying on as the Dyno-Dude. Vince rebuilt my engine, and his knowledge of the dyno (he can do them as well) was an added plus. The session began the day before I arrived on the scene, with Vince and Pierre putting the engine on the dyno stand, plumbing some of the fuel and oil, and wiring some of the electronic components like ignition box, coil, retard box, etc. This was on Friday afternoon and evening. At that time the boys started the engine and ran it up and down a few times to get the rings seated. I showed up at 8 AM on Saturday morning, the only time I could come in because of work restraints. We also dyno'ed on Sunday, but don't expect this as the norm, because Pierre isn't planning on working weekends…that's why he sold the store in the first place!
Here's a chronological list of events that occurred in this, my first dyno session: 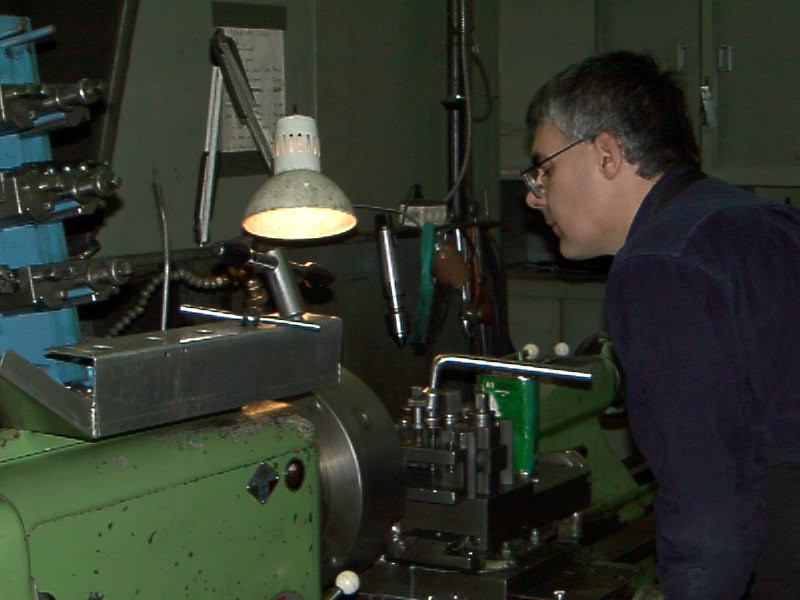 First dyno pull on a warmed up engine was
560 HP. Wow! Because of the temperature
differential in the motor and the dyno's water
tank, Pierre determined the engine needed
more cooling. I recall when I was at the track
often having cooling problems, something I
would hope would be fixed with my new
aluminum rad. In this case the dyno showed
the problem wasn't with COOLING, but rather
with water circulation. Pierre made another
(bigger)
drive pulley for my electric water pump. Problem
fixed! This was only the first run yet the procedure
discovered a significant problem already. ·
Changed oil after this first run of about ½ hour, with
Pierre running the rpm up and down while loading
the engine with the dyno's water brake. We cut the
filter open to inspect for metal fragments.

Second pull gave us 591 HP. Changed the
advance-bushing in the distributor to change the
advance limit from 28 degrees to 15 degrees but
kept the advance springs that were in there, one
heavy, one light. · By the 3rd pull, we had used 15
gallons of C12! You know how expensive that stuff
is! But I was making more horsepower, fixing
problems and learning a lot about my equipment.
Isn't that what this sport is all about? Sure I was
spending money, but I say again, "Isn't that what this
sport is all about?" ·

On the next couple pulls we played with timing. All
year I had been running at about 38 deg total
advance, a value that never changed because I
couldn't tell the difference in any time slip. Well, that
was 3 degrees too high. With all conditions remaining
the same, something one can produce in a
dyno-room, we made 595 HP with 35 degrees in. ·
Removing the plugs, we saw the engine was running
a little rich but the dyno showed a lean condition. We
upped the front jets from 90 to 93 and the rear jets
from 88 to 91. We added a vacuum gauge to see if any power valve had to be changed,
but the power valve was okay. The engine was brought up to temperature of 140 degrees,
then revved to a point where the computer would rev the engine at 300 rpm/second to
7000 rpm, while putting a load on the crankshaft. Exhaust temperatures rose an average
of 200 degrees . We made 602 HP. Not bad for a small block FORD! · We did the run
again to see if it was repeatable. It was, another 602 HP. We changed out the jets again,
smaller this time, but we lost about 10 HP on that run.
To this point we had made 18 runs. Throughout the test Pierre saved the data to the computer. Later, I was able to download a demo program from the SuperFlow web-site and use this data to completely reconstruct my dyno session, even to the point of reproducing the 10 gauges of the dyno. · On Sunday we setup for nitrous oxide, installing the retard box and an RPM switch. Because the computer was going to control the run above 4000 RPM, Pierre wanted the nitrous to go on automatically from that point on. We did a baseline run without NOS to check timing and found problems with the wiring of the retard box. After 3 pulls we were back on track. We heated the bottle for 1000 psig, fixed a fuel regulator, and problems with my NOS plumbing.
On the first nitrous pull, with the small jets installed, the engine burped out 730 HP! Watching the event from the control booth, we could see, hear and feel the nitrous kick in. The screen display of actual horsepower being produced could be seen jumping 100 hp at the point of injection. · We ran out of NOS and my backup bottle was low as well, so we had to refill, and go through the process of heating the bottle and running the engine until the oil temp reached operating temperature again. After all was ready and the big jets installed for the second stage of nitrous, we did a high horsepower run. · This was the last run of the day.

We blew head gaskets, blew #4 plug apart and the engine "hydraulic'ed", not allowing the starter to turn the engine over. Looking at the data later, I saw that the engine made 800 STP corrected horsepower. We took the engine off the dyno, poured the water out of the spark plug holes and sprayed the cylinders with WD-40. The next day Vince told me the bad news about a melted piston, in #4 hole. Obviously the engine went lean, though none of the other cylinders indicated this condition. In fact the plugs were quite good and the dyno re-run didn't spot any problems. So, was it worth it? Pierre actually asked me that question…BEFORE I "blew" the engine. Despite the set-back mentioned above, I have to say it was. I found problems in my engine that are very difficult if not impossible to determine at the track. I learned a lot about my engine and how to make power. The results are instantaneous and weather or traction are not factors as they are on the track. When my engine is repaired I'm going back to the dyno for the Stage II nitrous run and get the remaining bugs out of the beast.